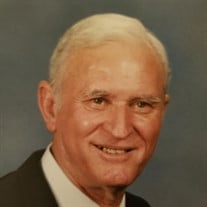 Weldon Roy Mangham of Longview, Texas, departed this life as a true Christian believer on January 6, 2021. Weldon was born on November 12, 1925, in Panola County Texas, the beloved son of Roy Scott Mangham and Naomi Davis Mangham. As a young boy, he happily roamed the piney woods of East Texas, where he learned to love animals and the wonders of nature. Throughout his life, he cherished his beloved dogs and enjoyed tending his backyard bird feeders. Weldon (who was also known as “Bill” to his friends) graduated from Carthage High School and attended LeTourneau University in Longview. He proudly served in the U.S. Navy from September, 1943 to January, 1946. On May 22, 1948, he married Reba Joyce Williams of Beckville, and the couple spent 30 happy years, mainly in Garland, until Reba’s death. They raised two daughters, Patricia Gail and Sharon Anne. The family took many vacation trips that often involved camping and visits to historic sites. During this time, Weldon began a career working at Central Freight Lines in Dallas. He loyally worked for the company for more than 40 years, in Dallas and later in Longview. After Reba’s death, he eventually moved to Longview, where he met and married Reba Dale Watkins. During their nearly 40-year marriage, the couple enjoyed many close friendships, especially those found through their long relationship with Greggton United Methodist Church. For many years, Weldon also served as a valued member of the Walton Cemetery Board in Panola County. Weldon fiercely loved his immediate and extended family and provided a firm foundation of love and guidance. His nieces and nephews thought of him as a role model and father figure in their lives. On Walton Cemetery’s annual “Cemetery Day,” he would walk the grounds, paying his respects to those who had passed before him, and he would share stories about them with anyone fortunate enough to accompany him. Weldon was preceded in death by his parents, Roy Scott Mangham and Naomi Davis Mangham; his siblings, Mabel Beaird, Kilbert Mangham, Ollie Mangham, Alton Mangham, Louise Barney, and Ailene Mcafee; his first wife, Reba Joyce Williams Mangham; his nephews, James McCall, Johnny Hill, Allen Hill, and Kenneth McClintock. Weldon is survived by his wife, Reba Dale Watkins Mangham, of Longview; his daughters, Patricia Gail Forsyth, of Laramie, Wyoming, and Sharon Anne Sager, of Garland; stepdaughter Lisa Hays of Kilgore; grandchildren Janean Forsyth-Lefevre, Zachary Forsyth, Samuel Forsyth, John A. Forsyth, Cameron Sager, and Christopher Sager; numerous great-grandchildren, nieces Linda Chambers and Delilah Henley and nephews Rodney McClintock, Arden Jemmott, Tony Hill, and Eddie Mangham. None of us knows with certainty how we will spend the time after this life, but if it is possible, Weldon will spend time walking the piney woods, watching the squirrels as they cavort through the trees, listening for the chatter of raccoons and the songs of insects as night falls, and petting the dog at his side. Cardinals, crows, hawks, and Jays will come to him, hoping for a handout, and if Weldon can manage it, they will get one. A Memorial service will be held 10:00 a.m. Saturday, January 9, 2021 at the Greggton U.M.C. in Longview, Texas with Rev. Ricky Ricks officiating. A graveside service will be held at Walton Cemetery 2:00 p.m. Sunday, January 10, 2021 with Rev. Ricky Ricks officiating. The family would like to thank all the numerous friends who have shown undying support and love.

Weldon Roy Mangham of Longview, Texas, departed this life as a true Christian believer on January 6, 2021. Weldon was born on November 12, 1925, in Panola County Texas, the beloved son of Roy Scott Mangham and Naomi Davis Mangham. As a young... View Obituary & Service Information

The family of Mr. Weldon Roy Mangham created this Life Tributes page to make it easy to share your memories.

Weldon Roy Mangham of Longview, Texas, departed this life as...

Send flowers to the Mangham family.