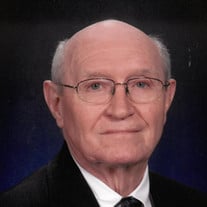 William Robert Duke, 83, passed away on December 4, 2021, at Briarcliff Skilled Nursing Center in Carthage, Texas after many years of dealing with dementia. There will be a service at Hawthorn Funeral Home on Wednesday December 8, 2021 at 2:00 PM. Dr. Charles Dodson will officiate. He will be buried at the Clayton Cemetery in Clayton, Texas under the direction of Hawthorn Funeral Home. Visitation will be Tuesday December 7, 2021 from 6:00 to 8:00 PM. William was born at home in Clayton, Texas, on April 1, 1938 to John Bernard and Myrtle Carter Duke. He attended school in Clayton and Carthage and graduated with the Carthage High School Class of 1956. He served in the U.S. Navy from June of 1957 until June of 1961. He earned a Bachelor’s Degree in Business Administration from North Texas State University in 1967. On May 31, 1963 he married Carolyn Holland, and they celebrated 58 years of marriage. In May of 2003 he retired from his position as assistant county auditor for Panola County in Carthage, Texas. William was a believer in Jesus Christ. He was a long-time member of Central Baptist Church where he was very active until he was no longer able to be. He served as a deacon, choir member, Sunday School Superintendent and in many other capacities. He was also active in his community and any activities his sons were involved in and that included serving as an assistant Boy Scout leader which meant regular meetings, camping, hiking and canoeing trips. William was a member of the Carthage Masonic Lodge and the Lions Club. He enjoyed participating in the annual Lion’s Club Show. William especially loved his family. An Avid reader, he also enjoyed reading to the grandchildren and great grandchildren. For years he loved entertaining small children by talking like Donald Duck. He also enjoyed playing card games and domino games, watching his favorite sports teams, and most anything that involved friends and family. William always had a smile for everyone and a hug for many. He was preceded in death by his parents, his in-laws, Raybun and Mary Ann Holland, his grandson, David Michael Duke, and his brothers-in-law John Saunders and Thomas Garrett. William is survived by his wife, Carolyn of Clayton, Texas, his sons, John (Lydia) Duke of Brandon, Mississippi, and Robert (Pam) Duke of Jacksonville, Texas. He is also survived by grandchildren John Christopher (Marguerite) Duke, Hannah Duke, and Hunter Duke and great grandchildren John William Duke II, Anna Duke, Miriam Duke, and Holland Duke. Also surviving William are his brother, J.R. (Debra) Duke and sister-in-law, Rebecca Garrett and many nieces, nephews, cousins and friends. Serving as pallbearers are Jason Duke, Jonathan Duke, Don Clinton, Nicky Parker, Johnny Parker, and Danny Reed. Memorials may be made to the Clayton Cemetery (Kay Mauritzen) 2372 FM 1970, Carthage, Texas, 75633.. An online guestbook may be signed at www.hawthornfuneralhome.com

William Robert Duke, 83, passed away on December 4, 2021, at Briarcliff Skilled Nursing Center in Carthage, Texas after many years of dealing with dementia. There will be a service at Hawthorn Funeral Home on Wednesday December 8, 2021 at 2:00... View Obituary & Service Information

The family of Mr. William Robert Duke created this Life Tributes page to make it easy to share your memories.

Send flowers to the Duke family.