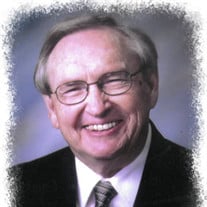 Funeral services for Dr. William C. “Bill” Everett, 86, of Carthage, Texas will be 1:00 p.m., Saturday, September 7, 2019 at Central Baptist Church with Rev. Joe Orr and Rev. Monty Pierce officiating. Burial will follow in the Odd Fellows Cemetery under the direction of Hawthorn Funeral Home. Visitation will be 6-8:00 p.m. Friday night at Hawthorn Funeral Home. Dr. William Clarence “Bill” Everett was born October 23, 1932 in Texarkana, Texas. He passed this life peacefully at his Carthage home September 2, 2019. Bill was born the youngest of three children to the marriage of Gaynell Wicker and William Clarence Everett, Sr. He was raised and schooled in Texarkana graduating with the Texas High School class of 1951. Bill was a graduate of East Texas Baptist University with the class of 1957. There Bill would meet his lifelong love partner Anita June Scott, they married June 19, 1954 and celebrated 62 years of marriage before she preceded him in death in 2016. He holds a Doctor of Divinity degree from East Texas Baptist University and two degrees from Southwestern Theological Seminary where he did his post-graduate studies. Together Bill and Anita raised two children in a loving Christian home while Bill continued to grow his pastoral ministry through First Baptist Church in Longview, Fielder Road Baptist Church in Arlington, Central Baptist Church in Carthage, and student pastorates in Arkansas, Louisiana and Texas. Dr. Everett was named Pastor Emeritus of Fielder Road Baptist upon his retirement after serving for 21 years. During his ministry the church grew from 500 members to more than 7,000. While he was pastor, the church completed over 15 million dollars in building projects including several educational buildings, an Early Childhood Center, a new Worship Center, and a Family Life Center. Dr. Everett held many responsible positions in various organizations of Baptist life. He served on executive boards and committees in associations, State and National levels. He served for over twenty years in the Board of Trustees of East Texas Baptist University, from which he and his wife are graduates. Though greatly successful and accomplished in the Lord’s work, his warm and compassionate nature made us all feel like we were his best friend. Dr. Everett is also preceded in death by his parents, and a brother, Wendell Haynes Everett, and a sister, Doris Pecot. He is survived by his children, son, James Ross “Jay” Everett and wife Beth, daughter, Laurie G. Everett Lindloff and husband Andy; grandchildren, Julianna Lindloff, Amy Elizabeth Everett and Ross Everett, special friends like family, Dennis and Pat Jordon, numerous nieces, nephews and a host of church congregations and friends. An online guestbook may be signed at www.hawthornfuneralhome.com

The family of Dr. William C. "Bill" Everett created this Life Tributes page to make it easy to share your memories.

Send flowers to the Everett family.