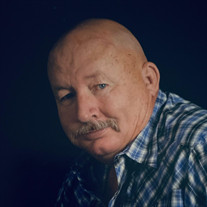 Funeral service for Mr. William Triplet, 75, of Keithville, Louisiana will be held Sunday, January 9, 2022, at Grawood Baptist Church in Keithville, Louisiana with Reverend Chris Wilcutt officiating. Burial will follow in Waldrop Cemetery under the direction of Hawthorn funeral Home. Visitation will be held Saturday, January 8, 2022, at the church. Mr. William Paul Triplet was born October 21, 1946, to the marriage of Chester Daniel and Elaine Maxine Gullet Triplet. He was one of three children. Mr. Triplet proudly served his country in the Navy and would then work for many years as a dirt contractor, building many of the roads that are driven on daily in Louisiana. He enjoyed fishing, camping, driving, tinkering with items and equipment, and his “entrepreneurial spirit.” He met and married Diantha Dunn, and they would share 41 years together before he passed. More than anything, he enjoyed the time he spent with his children and grandchildren who loved and adored him. Mr. Triplet was known to have a big heart and was always ready to help those in need anytime that he could. He is preceded in death by his parents, a son, Paul Edward triplet, and his mother-in-love, Pat “Meme” Dunn. William is survived by his loving wife, Diantha Triplet of Keithville; children, Todd Triplet and wife Annette of Minden, LA, Pepper Triplet of Keithville, LA, Jessica Shaw and fiancé, Lane of Snowden, LA, Lucas Triplet and wife Toni of Frierson, LA; sisters, Barbara Skipper of Keithville, LA, Tonia Gardner of Serepta, LA; grandchildren John, Austin, John and James, Allie, Chevelle, Nova, Cash, Tyce, Morgan and Caroline, great-grandchildren Emma and Ava; nieces, Angela Fontana, Christina Barry, Dona Lollar, Traci Westbrook, and Jennifer Tipps, nephews, Joshua Dunn, Dustie Dunn, Jessie Dunn, special friends Jeanann Gray, Robert and Francis Gildon, Nick and Karen Hodge, and Janice and Kerry Morgan. The family would like to say a special thanks to the many friends, family, and coworkers for their generous support during this difficult time. The Triplet family would also like to extend special condolences to the Levi Garrett Tobacco Company for the great loss of income William’s passing will bring. In Lieu of flowers, the family asks that donations be made to the St. Jude’s Children Foundation or to Christus Highland Cancer Treatment Center Foundation of Shreveport, LA.

The family of Mr. William Paul Triplet created this Life Tributes page to make it easy to share your memories.

Send flowers to the Triplet family.